The Story of the Good King and the Bad King 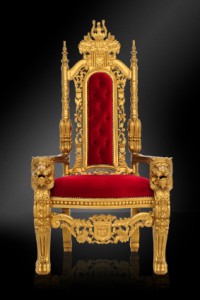 James was the prince of Pragyle when his father became ill and passed the throne to James.  James had watched his father for years and knew what he would do when he became king.  James set out to make life better for the citizens of Pragyle.

James looked at the local roads.  He identified two bridges that were close to breaking and he instructed his carpenters to reinforce the bridges.  The citizens had no idea James’ maintenance work prevented a future disaster.

James looked at the budget for the coming year.  He could see that taxes would need to be raised to provide all of the services the kingdom had budgeted.  Instead of raising taxes, however, James met with the financial advisors of the kingdom.   They identified many projects that really weren’t that important, such as creating a painting of James on the side of the palace, or performing a research study on the quality of moat water. By cutting out the waste James avoided raising taxes, and the people of the kingdom never realized they had been saved from additional expense.

James monitored the kingdom next door, Wötterfal, on a daily basis.  He managed the risk of an impending war by watching every movement the Wötterfal troops made, and he warned them any time they approached the border of Pragyle.

Throughout James’ tenure, the people of Pragyle were solicited for their rating of James.  James always scored “good” on a scale of poor, fair, good, and great.

Unfortunately James died in his sleep after 10 years as the king of Pragyle.  James did not have any offspring and was replaced via election.  The people of Pragyle elected Eli the Plumber to replace James.

Eli took over and enjoyed all of the luxuries of being king.  He ordered lavish dinners, had his face painted on the side of the palace, and spent most of his time playing backgammon.  Eli thought to himself “Oh my, what an easy life James had.”

As time passed, Eli learned that running the kingdom was not all fun and games.  Soon one of the old bridges of the kingdom collapsed and 40 citizens plunged to their death.  Eli made a proclamation that the bridge would be rebuilt with better materials, and this would never happen again in the kingdom.  The citizens cheered Eli’s visionary thinking.

Next, Eli had a budget issue.  The new mural on the side of the palace was expensive and so were the lush parties.  Eli would have to reduce costs elsewhere in the kingdom, or increase taxes on the citizens.  Not wanting to be unpopular, Eli reduced the amount of monitoring that was occurring with the neighboring Kingdom of Wötterfal.  Instead of having surveillance soldiers watch Wötterfal every day, he reduced surveillance to once a month.  The citizens would still be happy because their taxes did not increase.

Unfortunately soldiers from Wötterfal crossed the border of Pragyle between the surveillance periods.  A farmer of Pragyle spotted the advancing troops and ran to the castle to warn Eli.

Eli quickly called the soldiers together and screamed for the soldiers to hastily gather their weapons and fight for the survival of Pragyle.  The soldiers were at a disadvantage since the Wötterfal soldiers were armed and ready to pounce.  After two weeks of fighting, and 900 soldier deaths, the Wötterfal army was repelled and Pragyle was saved.  The citizens chanted Eli’s name.  His stimulating speech had inspired the Pragyle army to save the day.  When the citizens were surveyed later that year, they gave Eli the ranking of “great” and they all mused how James had never suggested building a bridge with better materials, or how he had never helped rescue them from the Wötterfal army.

We all like heroes like Captain “Sully” Sullenberger, who lands a flight on the Hudson after running into a flock of birds. But how much recognition would a ground controller have received if they had directed Sully’s plane to a different location and avoided the disaster all together?

Be successful on your agile projects.  Recognize the people who prevent disasters, not just those who save you from them.